Anatomy of Heart and Valve

Anatomy of Heart And Valves 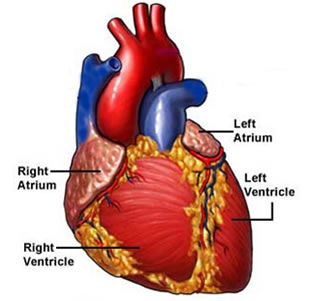 The heart is the hardest working muscle in the human body. Located almost in the center of the chest, the adult human heart is about the size of two fists held side-by-side.

At an average rate of 80 times a minute, the heart beats about 115,000 times in one day or 42 million times in a year. During an average lifetime, the human heart will beat more than 3 billion times - pumping an amount of blood that equals about 1 million barrels.

How the heart works

The cardiovascular system, composed of the heart and blood vessels, is responsible for circulating blood throughout your body to supply the body with oxygen and nutrients.

It is made up of:

Four chambers (two atria and two ventricles) that receive blood from the body and pump out blood to it.

The atria receive blood coming back to the heart.

The ventricles pump the blood out of the heart.

Blood vessels, which compose a network of arteries and veins that carry blood throughout the body.

Arteries transport blood from the heart to the body tissues.
Veins carry blood back to the heart.

Each valve has flaps, called leaflets,that allow the forward flow of blood and prevent the backward flow.

An electrical system of the heart that controls how fast it beats. 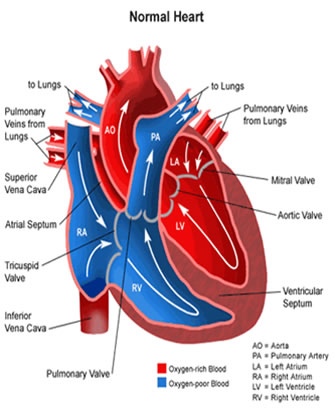 Your heart and circulatory system make up your cardiovascular system. Your heart works as a pump that pushes blood to the organs, tissues, and cells of your body. Blood delivers oxygen and nutrients to every cell and removes the carbon dioxide and waste products made by those cells. Blood is carried from heart to the rest of the body through a complex network of arteries, arterioles, and capillaries. Blood is returned to heart through venules and veins. If all the vessels of this network in body were laid end-to-end, they would extend for about 60,000 miles (more than 96,500 kilometers), which is far enough to circle the earth more than twice!

What are heart valves?

The heart consists of four chambers, two atria (upper chambers) and two ventricles (lower chambers). There is a valve through which blood passes before leaving each chamber of the heart. The valves prevent the backward flow of blood. 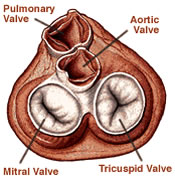 The four heart valves include the following:

How do the heart valves function?

As the heart muscle contracts and relaxes, the valves open and shut, letting blood flow into the ventricles and atria at alternate times.
The following is a step-by-step illustration of how the valves function normally in the left ventricle:

What is heart valve disease?

Heart valves can have one of two malfunctions:

The valve(s) does not close completely, causing the blood to flow backward instead of forward through the valve.

The valve(s) opening becomes narrowed or does not form properly, inhibiting the flow of blood out of the ventricle or atria. The heart is forced to pump blood with increased force in order to move blood through the stiff (stenotic) valve(s).
Heart valves can have both malfunctions at the same time (regurgitation and stenosis). When heart valves fail to open and close properly, the implications for the heart can be serious, possibly hampering the heart's ability to pump blood adequately through the body. Heart valve problems are one cause of heart failure. 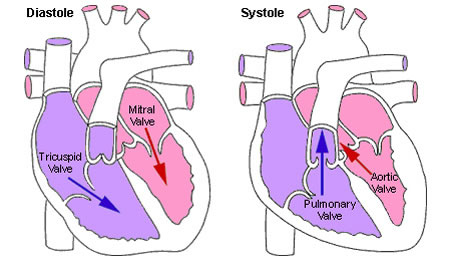 Symptoms depend on the patient and the type and severity of valve disease. Some patients have no symptoms at all. In other cases, valve disease may take its toll over many years. In time, patients may develop congestive heart failure. Also, valve disease may lead to heart muscle disease (cardiomyopathy), an irregular heartbeat (arrhythmia), and blood clots.

Your doctor can tell if you have valve disease by listening to your heart with a stethoscope. Doctors can listen for the distinct clicking sounds or murmurs of valve disease. Other tests your doctor may order include